In 1899, the Dobbs Ferry Free Library and Reading Room was organized under the “Women’s Christian Temperance Union.” A small collection of books gathered by the ladies was placed in the front parlor of a home on lower Main Street. Mrs. Pearse, the wife of the owner, acted as librarian. Situated in what was then the very center of town, she kept the library open every day, and allowed books to circulate for two weeks.

In 1909 the library was granted an Association Charter by the State Board of Regents, as the Dobbs Ferry Free Library. It moved into the ground floor of 153 Main Street, which also housed the William McKinley Free Kindergarten on the top floor. Miss Louise Miller, the kindergarten teacher and her assistant ran the library during the afternoon and evening. Col. Franklin Q. Brown, Library Board President and benefactor for many years, and his wife Ida Eldridge Brown gave the library use of the building at 153 Main Street, rent-free.

After Ida Brown died in 1950, Col. Brown donated the library building to the Village in her honor. This was in August of 1951, at which time the building was remodeled. A Children’s Room was established on the second floor. It was not until 1957 that the Dobbs Ferry Free Library was re-chartered and became the Dobbs Ferry Public Library. The growing library collection soon outgrew its space.

In the late 1960’s plans were made to build a new library on the original site. A referendum on the new library was defeated in 1971. To make better use of the existing space, a major renovation took place in 1973. However, the existing building was still too small for the village’s 10,000 residents and was not handicapped accessible. After many years of searching for a better site, approval was given by the Village Board of Trustees for new construction on a lot on lower Main Street, near to the library’s original home. On May 6, 2001 a groundbreaking ceremony was held for the new library building, which was designed by Peter Gisolfi Associates. 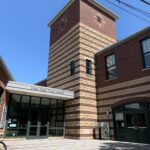 Crowned by its distinctive Clock Tower, the new building is more than twice the size of the old library. It has a separate Children’s Room, an Adult Reading Room (named after former resident Doris Volland, who bequeathed her two million dollar estate to the library), a large Meeting Room with Art Gallery, a Conference Room, and a terrace with Hudson River views. The building is ADA compliant. The new library building was dedicated on January 12, 2003.